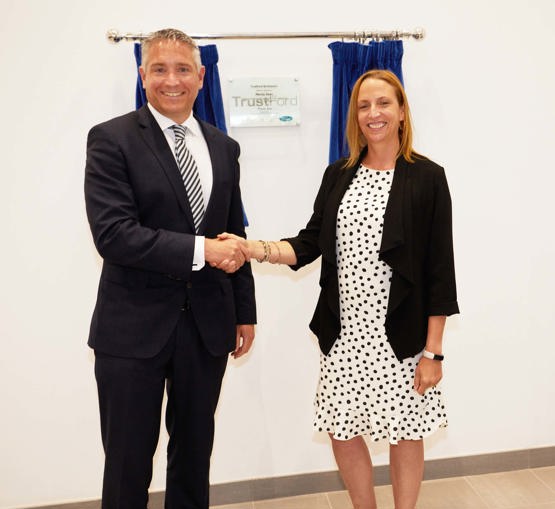 TrustFord has increased the aftermarket and commercial vehicle offering at its recently reopened Wimbledon dealership with a £500,000 refurbishment of the recently acquired facility.

Also in attendance at yesterday’s (June 16) event were Ryan Baker, TrustFord’s National CV Sales Manager and Mark Jones, District Manager at Ford Motor Company, along with members of the Board of Directors and the TrustFord’s management team.

Mustoe said: “It was great to visit our newly completed venue at Wimbledon today. The facilities, including additional space and range for our commercial vehicle customers and Wimbledon’s expert team, now allow us to ensure that our customers have the best possible experience when they visit us.

Dean said TrustFord’s newly upgraded dealership looked “incredible with its use of Ford’s new global look and styling”, adding: “The timing of this relaunch is excellent following the introduction of Ford Pro and the launch of E-Transit.”

TrustFord’s acquisition in May 2021 of the Wimbledon and neighboring Croydon franchise site continued its consolidation of Ford’s car retail network in London.

The move saw sales of new cars and commercial vehicles previously handled by the Croydon franchise, also operating under the Dees division of Cambria, directed to Wimbledon.

TrustFord’s series of acquisitions follows a restructuring of its operations in 2020 which saw the £30 million sale of its 4.44-acre Alperton dealership and the creation of a brand new after-sales center of 20 bays and a Parts Plus franchise “just 200 meters away”, back in 2020.

The group has also closed its Banstead dealership – which will be consolidated in Epsom – and decided to transfer new car sales operations from Eltham and Perry Bar to Epsom and Erdington respectively.

Among the changes to the Wimbledon Ford dealership as part of its redevelopment work was the creation of the first TrustFord dealership with the brand’s new “Signature” visual identity.

The site has a 16-bay after-sales workshop, which offers intelligent body condition checks as well as scuff and scratch repair.

TrustFord Chief Operating Officer John Leeman said: “With the refurbishment and new facilities and services that we can offer, we will be able to provide better customer service to the Wimbledon area than ever before.

“I am especially proud of my colleagues who have worked hard to get the site ready to open and who are so dedicated to maintaining the standard of customer service.”

TrustFord’s time at Wimbledon was not without its complications.

In May last year, the group embarked on a nationwide tree planting exercise and donated £10,000 to green community projects in response to residents’ backlash to the felling of trees on the site.