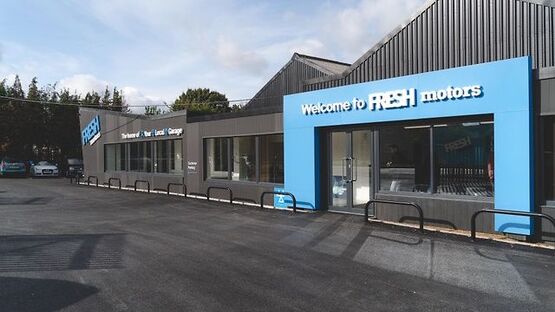 Fresh Motors has opened a new location in Watton with a capacity to display over 100 used cars and vans for sale.

The company, founded in 2016 by young entrepreneur Jacob Freshwater a year after graduating from university, has now moved to its third location in six years.

Freshwater, who has a degree in accountancy, was proclaimed a ‘rising star’ in Auto Trader’s Retailer Awards in 2018, and has grown a multi-million pound used car operation from the modest operation that he began with his brother Isaac.

Within two years of launch, he moved Fresh Motors from its small office and original forecourt into a 6,000 square foot showroom.

Now he has found a new home on Norwich Road in a renovated property that was once a fuel forecourt and Kia Drome Garage dealership until he lost the South Korean new car franchise in the early 2000s.

Fresh Motors now employs 10 full-time and other part-time staff, and has a workshop for service and technical checks as well as a dedicated valet building. The old fuel forecourt and an abandoned bungalow on the site have been removed.

“Fresh Motors has relocated and started Your Local Garage in Watton,” said Freshwater, 27.

“Over the past two years we have worked hard behind the scenes to develop new premises in Watton with a large forecourt, showroom, prep facilities and new vehicle workshop, expanding our retail offering from cars and vans to vehicle repairs, MOT, maintenance and much more.

“Growing through the pandemic has not been easy, but our loyal customer base and wonderful staff have enabled the business to operate sustainably despite turbulent business conditions.