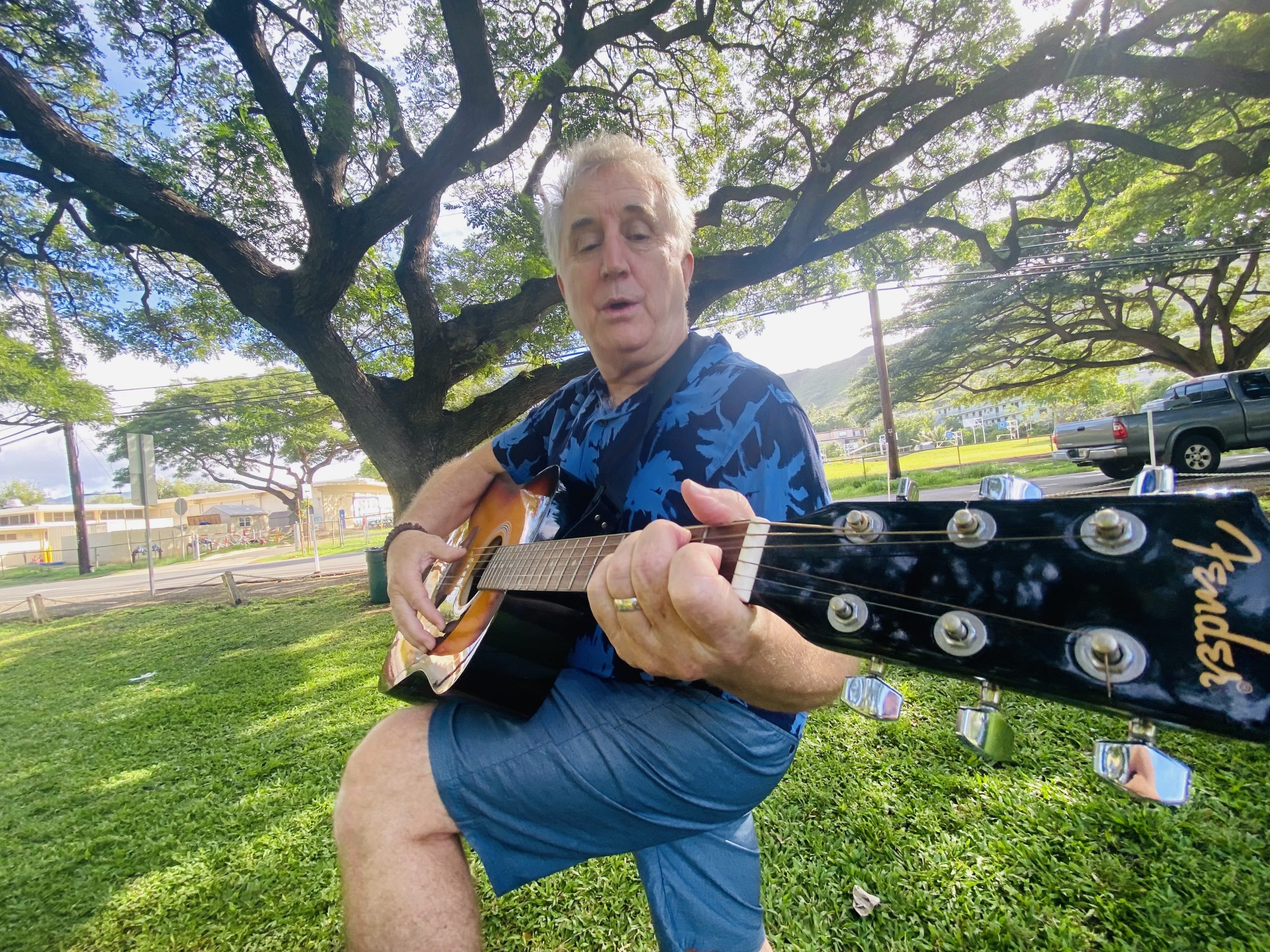 Over the past two years, the Covid-19 crisis has produced well-documented benefits for companies like home fitness company Peloton and Zoom Video Communications. But another company — this one based in Hawaii — has also thrived amid the pandemic for an unexpected reason.

Servco Pacific, which is best known for selling Toyotas and Lexus, was perfectly positioned to pique the interest of people stuck at home looking for creative, artistic and emotional outlets. The reason: Servco is also the majority owner of Fender Musical Instruments Corp., the iconic maker of guitars like the Stratocaster and Telecaster. And millions of people have started playing guitars and other fretted instruments, like ukuleles and basses, in the past couple of years.

“Our estimate is that 16 million new starters started during Covid in the United States,” said Mark Fukunaga, president and CEO of Servco. “It is enormous.”

The boom was so big that the editor of a music trade magazine compared the impact of Covid on entry-level six-string purchases to that of Beatlemania. Rolling Stone asked, “Has everyone bought a guitar in quarantine or what?”

And Fender — and by extension Servco’s music division — saw sales increase 30% in 2020 and similarly in 2021, Fukunaga said.

In dollar terms, the increases were in the range of $100 million a year, Fender chief executive Andy Mooney recently told CNBC.

“Every time we start to standardize – and a lot of that depends on how omicron develops – we always see growth,” he said. “We are still quite optimistic.”

Although Servco is best known for selling cars – as well as dominating Hawaii, it’s Australia’s largest Toyota dealership – the company’s musical roots run deep. In fact, its musical DNA dates back to the 1930s, when Fukunaga’s grandfather, Peter Fukunaga, started Easy Music as a subsidiary of his home appliance company, Easy Appliances.

In the 1950s, Easy Music connected with Clarence Leonidas “Leo” Fender, who was creating archetypal guitars like the Stratocaster and guitar amps. At the time, Fender’s ties to Hawaiian music were more than superficial. Before Fender made modern electric guitars, its dominant product was the lap steel guitar often used in Hawaiian music, Fukunaga said.

In fact, Fukunaga says, “Leo wasn’t a regular guitarist; he was a lap steel player.

In the 1980s, according to Servco’s website, the company was among the small group of investors that backed Bill Schultz in buying Fender from CBS. Some 25 years later, Servco increased its stake by acquiring a significant stake in Fender from Weston Presidio, a private equity firm.

In 2005, Servco sold Easy Music to Peter Dods, a former Wall Street analyst and son of longtime First Hawaiian Bank chief executive Walter Dods Jr. -hop, but his father, who was a board member of Servco, convinced him to go into a bigger business.

Peter Dods says he knew people would think his parents were buying a business for him, but he said: “Really, it was more my dad pushing me off the edge.”

In any case, the pandemic has also been a boon for Easy Music. Home and mobile recording equipment flew off the shelves at the start of the pandemic, as locked-down musicians sought to release their music when live concerts were banned.

Since then, sales at all levels have picked up: guitars, keyboards and recording gear are all popular, Dods said. Now that things are opening up, DJ equipment is regaining popularity.

None of that happened, Dods says.

Initially taken aback by the pandemic in terms of its online presence, Easy Music quickly ramped up its e-commerce business. The company now adds about 100 new products per month. And, like many retailers, there were times when Easy Music had to shut down by government order and needed help from the federal Paycheck Protection Program.

“Without that, we might have had to throw in the towel,” he said.

Among those who picked up a guitar as the world stood still was Murti Hower. A 62-year-old yoga instructor, Hower hadn’t performed since he stopped trying at 14. Out of work and mostly stuck at home in March 2020, Hower thought, “I just gotta do something; I’m going to be crazy.

So he ordered a Fender acoustic guitar online. Since then, the guitar has become a friend to Hower and his wife, Larina Hawkins. They named the Joni guitar after singer Joni Mitchell, and now Hower has a band including friends on tambourine and harmonica. They meet at Kapiolani Park for full moon jam sessions.

Of course, not all new players bought Fenders – or new instruments at all. Rose Wright is a good example. A massage therapist and personal assistant who lives in Hawaii Kai, Wright picked up a used ukulele from a client she was helping clear out clutter.

Wright took the instrument to a friend who refurbishes instruments, and before long Wright had joined an informal hui practicing the ukulele outside in a park once a week.

Wright says she tried playing the guitar 20 years ago, but gave up in frustration. One difference now, she says, is that there are plenty of tools online to help her learn, especially YouTube videos. After forcing herself to practice 15 minutes a day, Wright says she’s now down to 35 minutes.

“When you play with YouTube, you get sound that you jump in,” which makes practicing more enjoyable, she said.

His advice to beginners: “If you play a little every day, even 15 minutes, you get better, and who doesn’t have 15 minutes?

For example, he said, online tools have become an extremely popular way for people to learn. When Fender offered 1 million free subscriptions to its Fender Play course site at the start of the pandemic, Fukunaga said the company may have expected tens of thousands of new subscribers. Instead, 1 million joined within days.

Research also shows that people tend to keep playing as long as they can get through what Fukunaga calls the “valley of death” of the early days when practicing isn’t fun.

“If you can get people over that one-year hump, they tend to be lifelong gamers,” he said.

Finally, Fukunaga said, there’s the milestone of playing for an audience, which he calls an “inflection point” that can solidify a budding player’s engagement with the art. These performances include posting videos on social media platforms like YouTube and Instagram, where no one expects a rookie artist to be stellar.

“Social media is really about showing up and getting known,” he said.

Servco’s extraordinary place in the music world is not lost on Fukunaga. He knows that few other brands are so beloved that they inspire people, some of whom don’t play guitars, to wear T-shirts and/or get tattoos of the company logo.

But that doesn’t mean sitting still. In October, Fender announced a merger with recording technology company PreSonus, which manufactures a range of sound products including recording software, microphones, mixing systems and speakers. The announcement acknowledged that times are changing, as guitarists these days don’t just want to plug into a hot, buzzy Fender vacuum tube amplifier.

“Many also plug their instruments into interfaces, using virtual amps and effects to create their sounds,” Fender said in a statement announcing the deal. “Gamers of all skill levels are spending more time online than ever and using a variety of products and technologies to learn, practice, play and play, record and share. This modern workflow has expanded the traditional signal chain to include the capture and distribution of creative content globally.”

Helping position Fender for the future while staying true to its roots is vital for Servco, which began as a two-car garage in Waialua in 1919, Fukunaga said. This includes giving back by donating 2,750 ukuleles and acoustic guitars to public schools in Hawaii and helping found a group supporting a California ballot measure that provides more funding for arts education.

“Fender is now a core business for us long term,” he said. “We saw ourselves as custodians of this incredible legacy.”

Sign up for our FREE morning newsletter and face more informed every day.