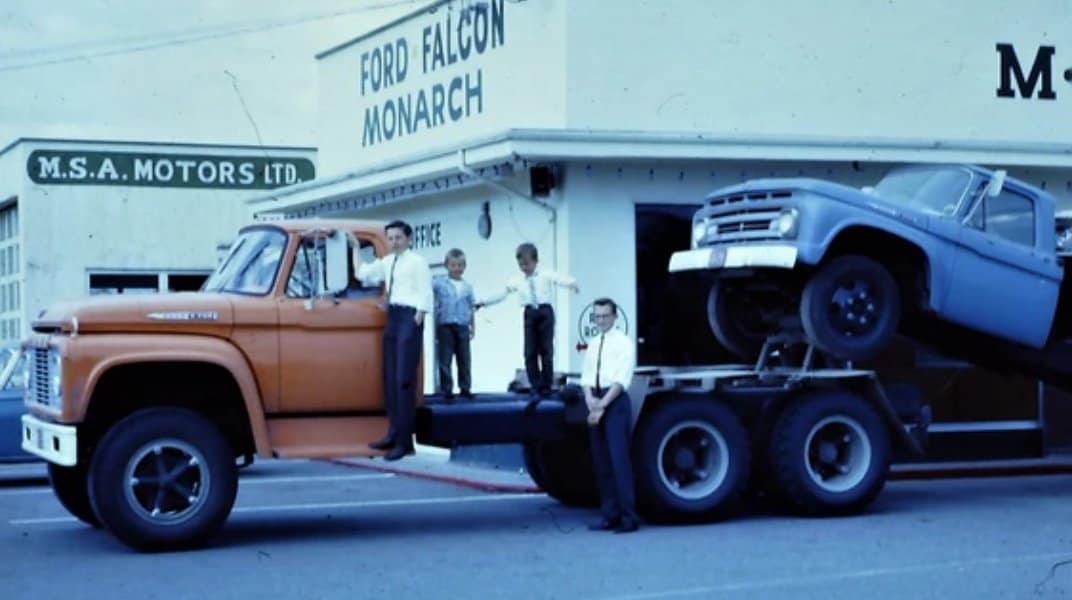 Terry Friesen remembers being a 16-year-old high school student and being told by his car dealer father to go to the airport and catch a flight to Toronto where his father was waiting with a car and a moving van he had bought and had to bring back in British Columbia.

“He gave me $200 and a credit card and a crash course in driving a truck with a five-speed transmission and a two-speed axle and said goodbye,” Terry tells about his first trip across Canada. “The truck had an Oldsmobile Vista Cruiser station wagon in the back.”

He remembers being reprimanded for not finishing his homework in high school and the teacher didn’t know why. The day before, after school, the 17-year-old had left his father’s Ford dealership in Abbotsford with an F100 pickup truck to be dropped off at a dealership in Kamloops. There he took another truck to Penticton where he picked up a Ford Galaxie. He got home in the wee hours of the morning: Route 1 through the Fraser Canyon, through the Okanagan and home above Hope-Princeton in one fell swoop.

His father, HD (Henry) Friesen, had purchased MSA Motors, a 70-year-old Ford Monarch dealership, in 1959. MSA represents the Fraser Valley communities of Matsqui, Sumas and Abbotsford, an hour east of Vancouver. Henry Friesen was the ultimate wheel dealer. There were five boys in the family, each working at the Henry Friesen dealership. On one occasion, 30 new cars were sold to a rental company in Terrace and some of the boys were enlisted to ferry the cars north.

Henry’s sons got access to amazing cars because the concession had a powerful division. There’s a photo of a 375 horsepower Calypso Coral 1970 Boss 429 Mustang that Terry Friesen drove when he was 14. Another photo shows his brother Dennis piloting a 1970 Mercury Montego 428 demonstrator through Sumas Prairie.

The boys learned to drive their father’s used cars on vacant land across from the dealership on Fraser Way, which was then the Trans-Canada Highway through downtown Abbotsford. They also learned the art of selling. “My dad was always selling,” says Terry at his home in Abbotsford, where he keeps a collection of vintage Ford pickups and cars.

He remembers that in 1974, his father was returning from Ontario with a 1972 Mercury Marquis when he saw a broken down 1966 Mercury near Brooks, Alberta.

“He stopped to help then sold the 1972 Mercury he was driving to the disabled motorist and took his car in exchange. I had to fly to Calgary and drive a Bronco my dad had purchased in Saskatoon to flat tow the broken Mercury.

On another occasion, her father came out to talk to a man who was hitchhiking outside the dealership.

“My dad traded the guitar the man was carrying for a cheap Zephyr Zodiac he had in the back of his lot,” Terry said. “My father took chickens, a church organ and even a Cessna plane in exchange for vehicles.”

MSA Motors was started by Peter Dueck in 1951. Dueck would have a later career as a member of the British Columbia Legislative Assembly, where he served as Minister of Health and Minister of Higher Education. Henry Friesen had operated a used car fleet in New Westminster, then bought a motel in Penticton which he traded to Dueck for M.SA. Motors in 1959. He operated the dealership until 1985. MSA Ford is now located in the Fraser Valley Auto Mall.

Terry Friesen worked for his father’s dealership for six years after high school in gas bar management and after-sales service. His brothers worked in the sales, service and parts departments.

“We drove some of the new cars. But we had to earn money to buy our own cars,” says Terry, adding that his first car was an unimpressive, rusty 1958 Ford 300 sedan that cost him $53.50. He would go on to a successful career selling trucks using sales techniques learned from his father and the salespeople who worked for him.

Terry has a large collection of automotive memorabilia at his home in Abbotsford and some nifty classic Ford products in his garage. Among them is a 1957 Ford Custom 300, similar to the 1958 model he owned as a teenager. But this one is heavily modified to go really fast. Parked next to it is a 1950 Ford coach that could have been sold as a year-old used car at his father’s dealership.

The cool classics are its 1951 pickups. The Ford is an all-green custom with pearlescent flames purchased in 1987. The Canadian-built Mercury pickup has modified mechanics for handling, but still looks very much like how it was used by the prairie farmer who carried grain with her. The sign on the door pays homage to Terry’s grandfather’s farm in Saskatchewan.

This article was written by Alyn Edwards, classic car enthusiast and partner of Peak Communicators, a Vancouver-based PR firm, and was published by Conduct.